Marti will be hosting a game night for our May meeting.  RSVP Marti so she'll know how many are coming.

Spring Fling Recap - Joan's version
Thirteen of us from five states (four states and a district to be accurate) gathered at Ruth’s beautiful hilltop home on Thursday afternoon. Walt met half the gals at the San Diego airport, and the remainder followed in Sue Butler’s rental, a Chevy Traverse. Upon arrival was a wonderful variety of tea sandwiches, pastries, and cupcakes, chocolates and of course many teas.  We spent the afternoon visiting and taking a stroll through the neighborhood. A hearty dinner was followed by a robust game of Win Lose or Draw. While some prepared for bed, others started a discussion on when one should begin the Social Security plan.
Friday started early for some and others were able to sleep despite the volume of voices. Ruth had personalized mugs and wine glasses for each of us. When everyone was up and ready to go, we headed to Del Coronado for lunch and a bit of shopping. Friday night we went to Shout- San Diego’s dueling piano bar. Della was sent on stage and was a sport. As the evening progressed the crowd got rowdier and rastier. A fun time was had by all. Another late night of Outburst, a game that tested our memory of pre 1984 questions on life, and products.
Saturday morning we headed to Encinitas for a Garden Show. We toured many homes in the area both large and small displaying natural habitats, roses, cactus, trees and succulents. It was a lot of walking….ask Vicki how many steps she logged on her pedometer. Happy hour drinks and appetizers followed by an early dinner at the Beach House in Cardiff by the Sea was great. We had a phenomenal waiter named Brendon that was a true sport to bear with fourteen boisterous women.
Sharon shared her secret- arms up and a towel. You had to be there and it helped that we had a little alcohol in our systems. Darren and his wife Erilynn came to the restaurant to pick up Randi for the remainder of the weekend. The rest of us made it back to Ruth’s with the help of three GPS systems.
Ruth revealed that she had a secret ambition to be a bartender and she mixed up some pretty fantastic drinks once we got home Saturday night.
Sunday Doug and Bory brought two-year old Dougie over for a quick visit. Robin’s sister and grand-daughter came by for Robin and Joan and Walt left to meet a friend at the same Beach House for brunch. Mary had plans with family to attend the Padre’s game and Sue Butler took Della back to the airport for an early flight back to Reno.  Doug who had been banished to a hotel and then went up to visit family in Ventura returned home to help get the rest of the girls to the airport.
We presented Ruth with two gift certificates to her favorite garden spot and to a spa. We hope she is relaxing in Hawaii this week and will return to enjoy a massage. What a wonderful hostess she is and we all had the Spring Fling of a lifetime.
(Editor's Note:  Send me some more versions and I'll add them to this month's newsletter.)

Congratulations
Our congratulations to Tina and Jim Cuneo who will be celebrating 35 years of wedded bliss on the 21st.

Well the toilet paper syndrome definitely was in place- the older one gets the faster it rolls.

April did arrive with out any tricks. We had company who brought an Easter basket and that was our sole decoration. We had plans to be in Tulsa at the Wilson gathering for Easter and depart immediately after for our Spring Fling. Walt and I visited St. John’s Episcopal Church in Tulsa on Easter Sunday and it was so packed that we celebrated the service not in the church, or the balcony or the multi purpose hall but in the original chapel. The service was “beamed” in on video to the remote locations……it is just not the same.

We flew to Phoenix after Easter to celebrate Trevor’s birthday. Our eldest grand daughter turned 13 earlier in the week. Oh My !!
We had a lovely birthday dinner in Scottsdale on the river walk. I posted it on Facebook and within the hour, our neighbor from Adamswood contacted us to say they too were in Scottsdale on Spring Break.  We enjoyed that surprise addition to the itinerary.
Trevor gave us the quick and dirty tour of Phoenix before we left to meet Randi and Dave in Sedona. Dave gave us the 50-cent tour of the area including Slide Rock Park. We enjoyed a nice lunch at the Oak Creek Brewery located in the world famous village of Tlaquepaque. It was my first taste of orange flavored beer. Dave had a much heartier beer. Trevor joined us after lunch for the continued 50-cent tour that climaxed with the sunset Pink Jeep tour of the canyons. Only problem was the weather was changing and the sunset was lost in the clouds. The next day we visited Jerome, a hillside copper mining town and returned to Sedona for some shopping.

We returned to Trevor’s home in Phoenix where we enjoyed the Glendale Jazz Festival, toured the state Capital and spent the day at Pioneer Living History Museum (much like the San Jose History Museum in Kelly Park).  I learned a lot about AZ and got a tan line to boot. I was also able to have lunch with a former colleague from my working days at Clinimetrics while in Phoenix.

On Wednesday, Walt and I drove to San Diego for the beginning of the Las Madres Spring Fling. We had a lovely dinner at Prada in Balboa Park and spent the night visiting Ruth and Doug.  In the morning Walt and I helped Ruth prepare for the arrival of the twelve additional ladies.  What an extravaganza but Ruth is the queen of event-planning. Hopefully, someone else is reporting on the weekend.
After the weekend, Walt and I enjoyed yet some more food and drinks at the Beach House in Cardiff and later, dinner with my brother, Mark.  Trevor asked us to delay our return to Phoenix as he had a water leak to deal with. We took that opportunity to visit our name sake Wilson Creek Winery in Temecula with Walt’s cousins….more sampling and shopping.  We returned to Phoenix in time for our third Taco Tuesday at Trevors. He opens his home to his friends each Tuesday for a casual dinner and drinks. Come one or many we enjoyed meeting his new collection of friends. Trevor sits on the Phoenix board of visitors and has contacts with the mayor and council folk. He does sporadic TV spots but this time he had to wear make-up because he was “too shiny” after playing in the sun while we were in town. He is not a fan of make-up.

We flew back to Tulsa on Thursday evening, arriving on the last flight in at 12:10 am and unable to find our Prius in the long-term lot. Walt’s sister had delivered it and we couldn’t find it.  Finally the parking attendant, who wanted to close the lot, helped rescue us.
After a family dinner in Tulsa, we left for home. The green hills of home were a welcome site but the memories of a wonderful three weeks with family and friends……………………..priceless.

We meet every Saturday morning at 9 am at Le Boulanger at San Felipe and Yerba Buena.  There is a Starbucks across from it if you need something "special" to go with your bagel or pastry.   For Away Coffee on May 19th, we are going to venture down again to "Boogie on the Bayou" in Campbell.  Let's meet at 9 am at Orchard Valley Coffee (www.orchardvalleycoffee.com/) and then we can walk around the event that starts at 10 am. (http://www.downtowncampbell.com/eventinfo.php?eventid=15990) 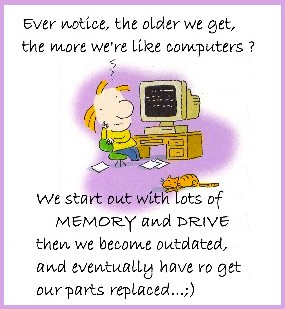 (How many of these did you already know?)